The Department of Computer Science, University of Cyprus, announces that in an international competition for Green Applications (2nd ITU Green ICT Application Challenge), organised by the International Telecommunications Union (ITU), Andreas Kamilaris, a PhD student of the department, has been awarded first prize for his research application “Social Electricity”. The prize includes USD 3,000, which will be awarded to Andreas at a special ceremony to be held on the 19th of September in Paris, during his presentation at the ITU Green Standards Week. A press release is available at: http://www.itu.int/ITU-T/climatechange/greenict/201206/index.html.

This Prize is considered particularly important, taking into account the status and size of the ITU organization (193 member countries and over 700 members from private organizations and academic institutes). ITU was founded in 1865 and is the United Nations specialized agency for information and communication technologies (ICTs).

The SocialElectricityapplication was developed through the Facebook online social networking platform. It aims to make citizens aware of their electrical energy consumption, by means of comparisons with the corresponding electrical consumption of their friends, as well as with the total consumption in the street / neighborhood / village / city / country where they live. By effective and realistic comparisons, the consumers may perceive their energy behavior and take steps to reduce their electricity and carbon footprint. 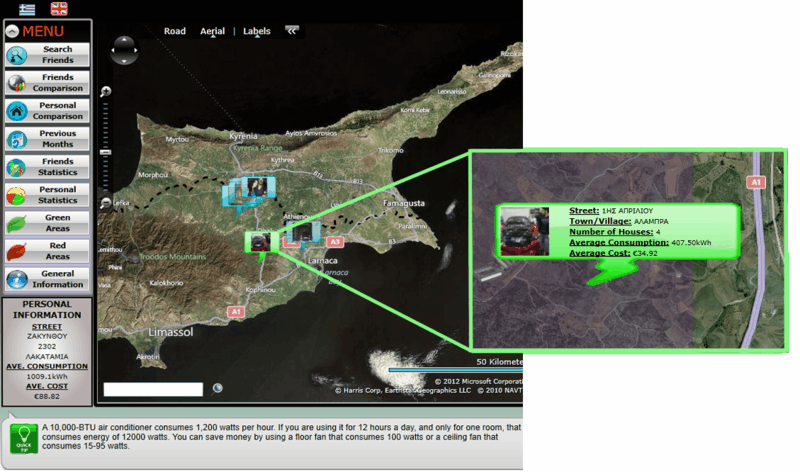 Andreas Kamilaris is a PhD student in the Networks Research Laboratory (NetRL) of the Computer Science Department, University of Cyprus, under the supervision of Professor Andreas Pitsillides. Social Electricity is part of larger research of the lab, which concerns harnessing social networking for more effective environmental awareness of citizens. The students of the department Diomidis Papadiomidous, George Taliadoros and Marios Michael have contributed in the implementation of the project.

SocialElectricity is supported by the Electricity Authority of Cyprus (EAC), Information Technology Department, which provides to the project the domestic consumptions of the Cypriot citizens every two months, categorized according to their address. Respecting the privacy of Cypriots, this data is anonymous and is aggregated in street/neighborhood level, to further ensure the anonymity of the consumers and their consumptions. Through Facebook, people can compare their consumption with their online friends. Finally, users may view statistics concerning the areas with the least/most energy consumption in their neighbourhood, province or even the whole of Cyprus.

As Malcolm Johnson, the Director of the Telecommunication Standardization Bureau (TSB) of the ITU points out, “ITU has been committed to enabling viable and financially affordable energy for all. Help us to develop a sustainable future”. Especially in Cyprus, with the well-known energy particularities, the SocialElectricity application comes to offer incentives to Cypriot consumers to work towards a “greener” island.

* Social Electricity is currently available as a beta version at the link http://apps.facebook.com/socialelectricity/, (Windows 7 or Apple Mac operating systems in beta version). You must have a Facebook account in order to use it. The final version of the application is expected to be released in mid-July, in a country-wide deployment with the participation and support of EAC.